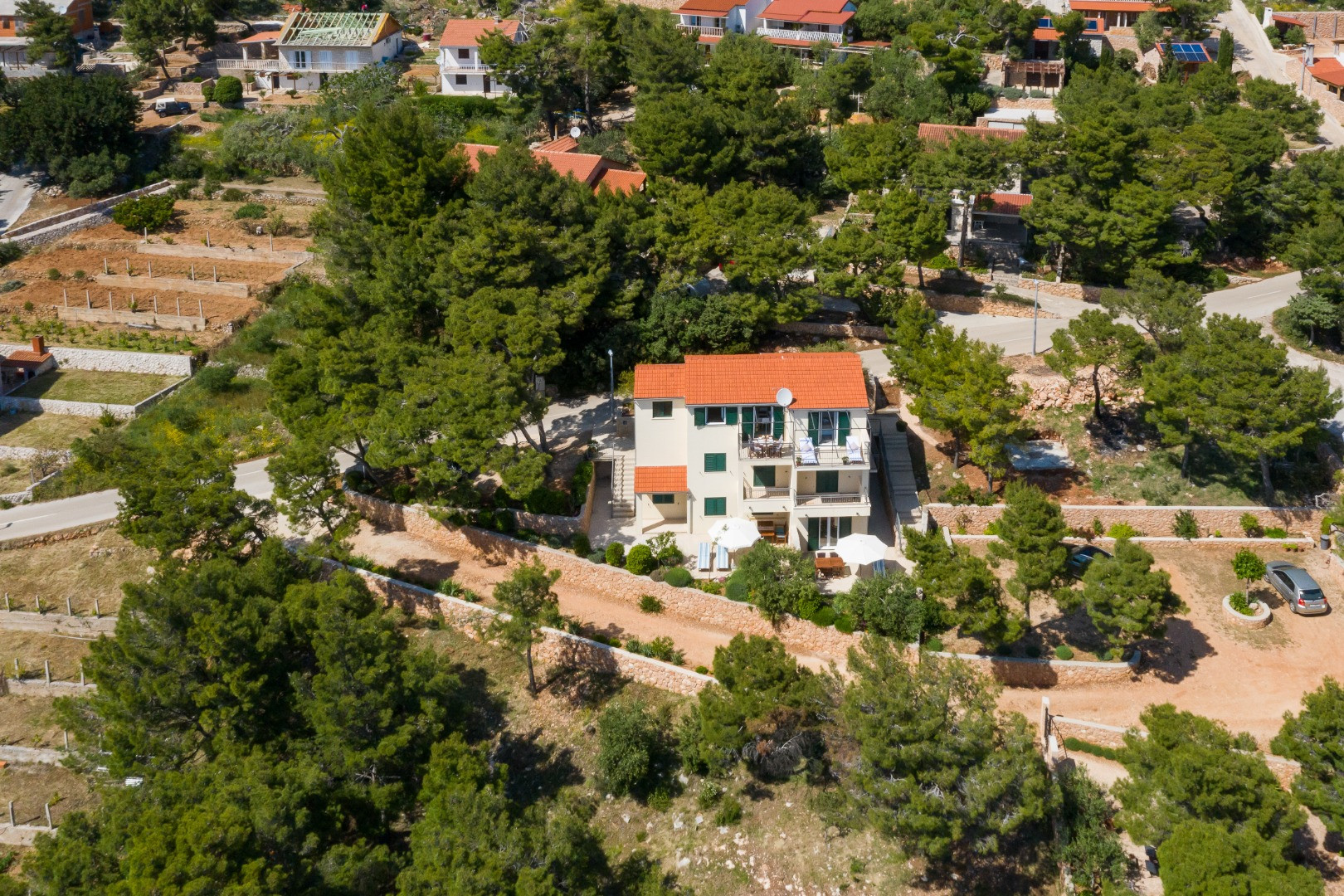 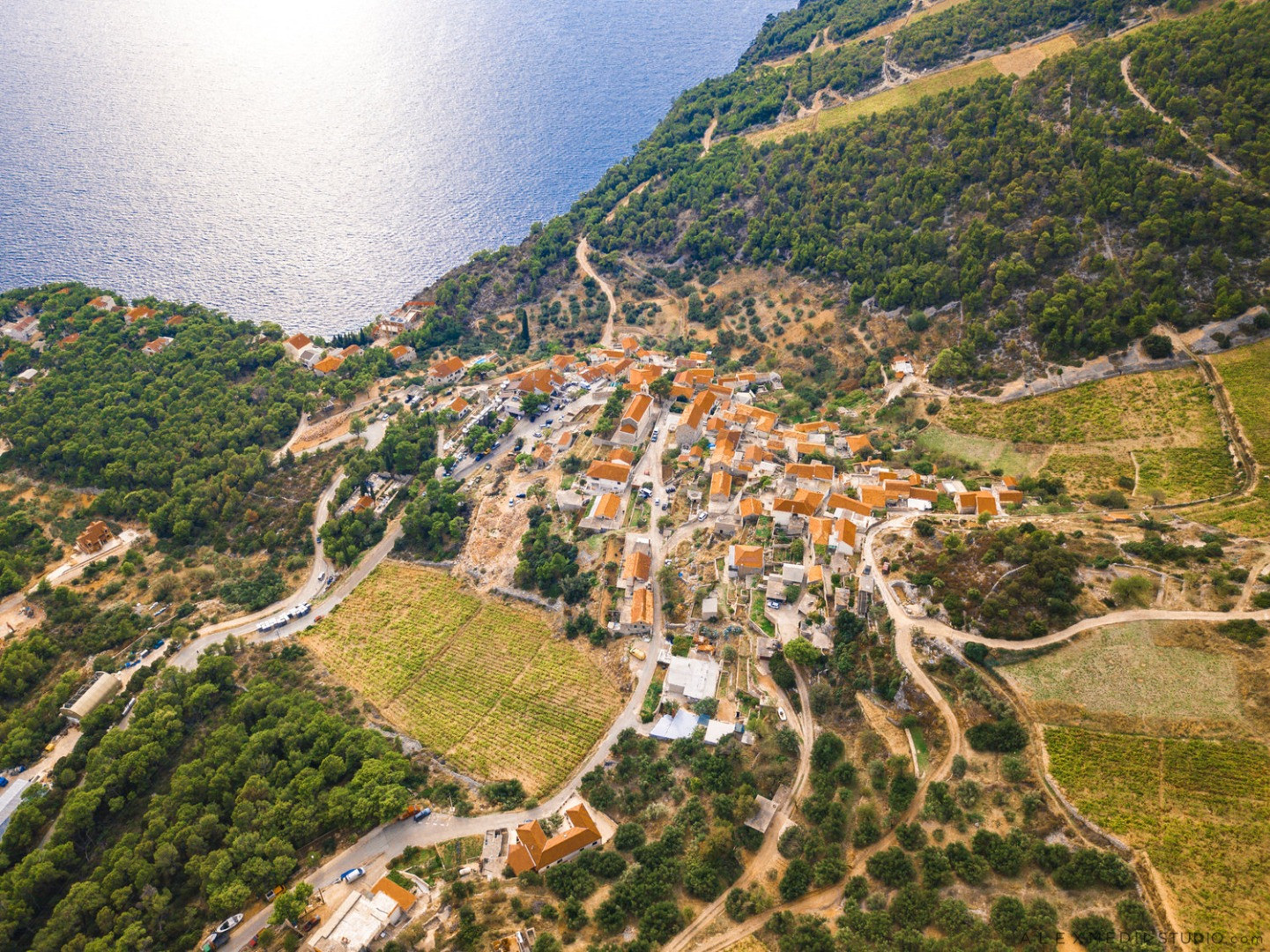 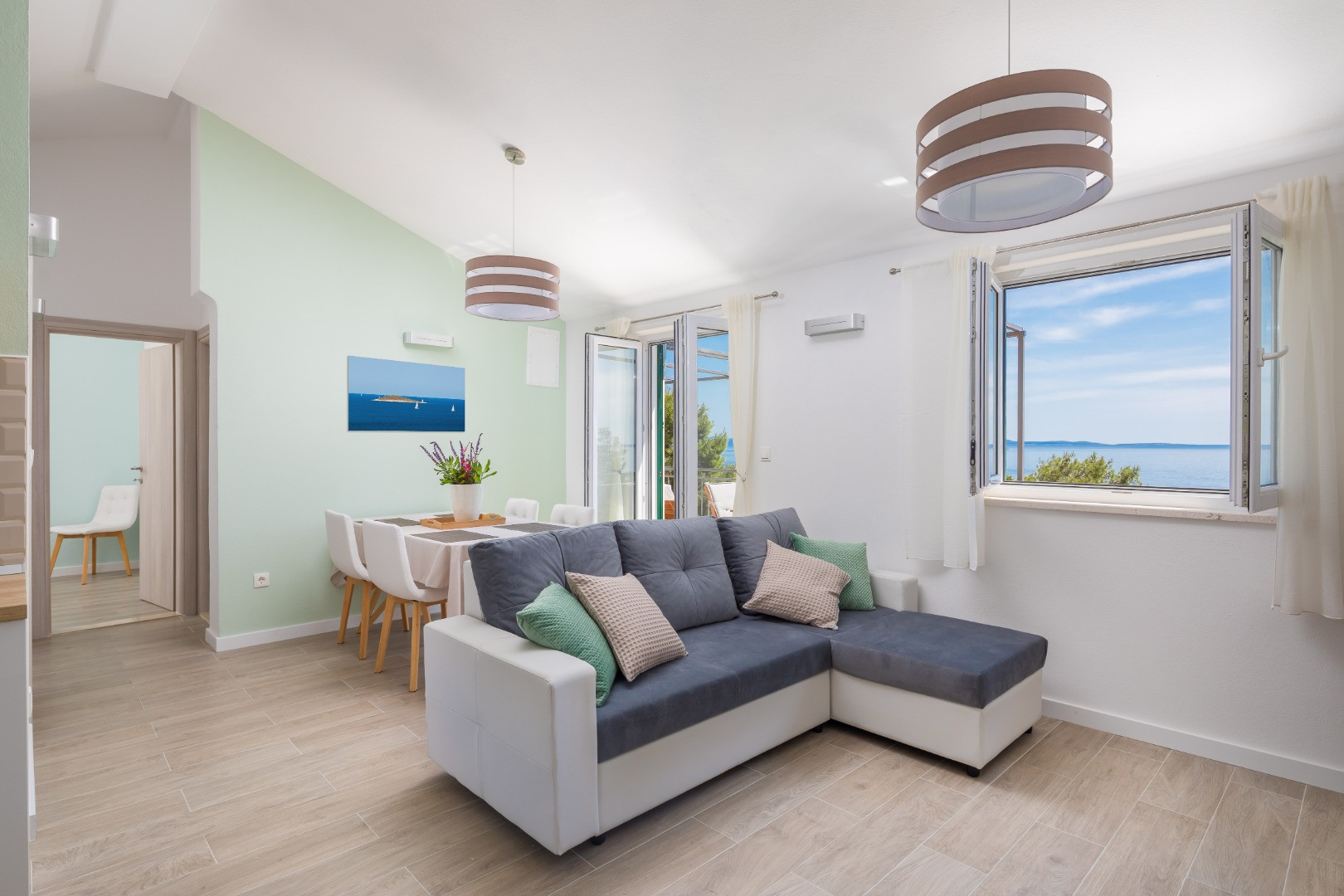 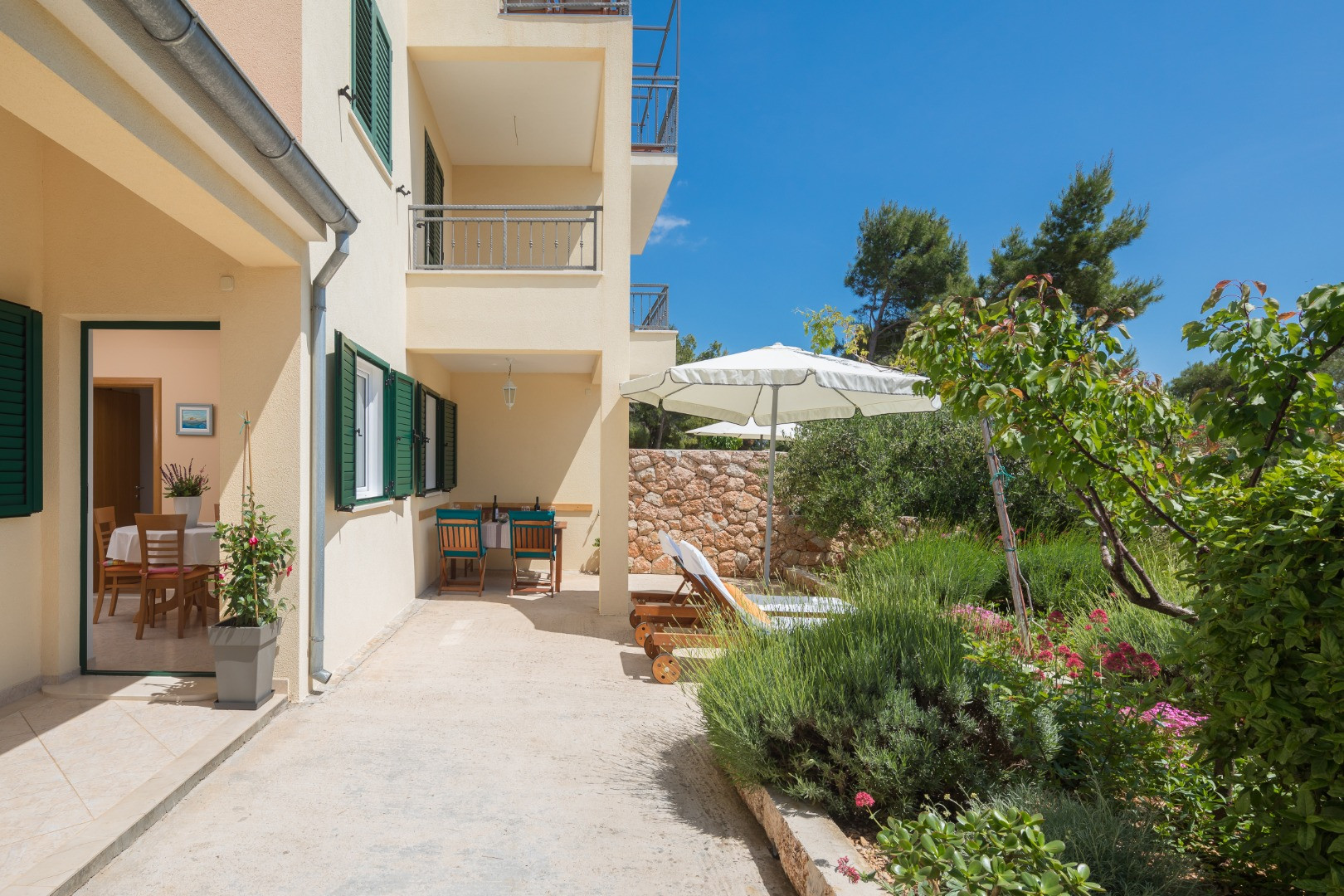 Apartments SilvAna are located in the small and picturesque village of Sveta Nedjelja, walking distance from the sea in a pine forest. This small viticultural and fishing village is situated on the southern slopes of the island Hvar, at the foothills of the highest peak - Sveti Nikola and in the heart of the famous wine-growing region. It is historically rich area with ecologically preserved nature, surrounded by pine forests, hidden coves, crystal clear sea, steep rocks, vineyards and fields with rosemary and lavender. Ideal for peaceful and relaxing holiday away from busy streets and urban life where you can enjoy Mediterranean cuisine accompanied by the glass of beautiful wine. 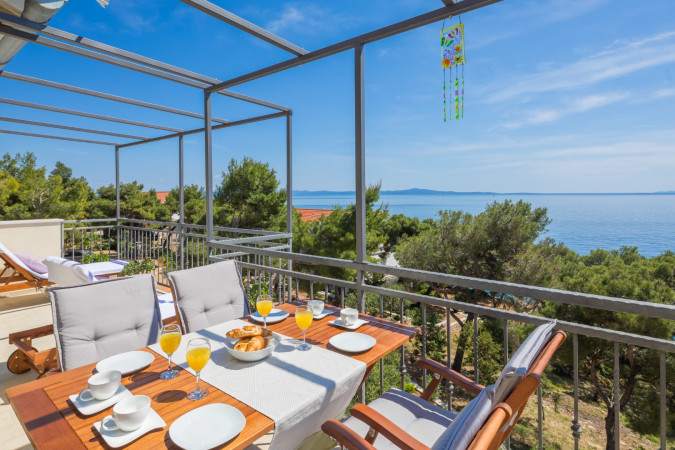 We are Plenkovic family and are ancestors lived here since ancient times, they were farmers and fishermen like most of the people in the village.In the seventies when the tourists discovered this little paradise we were accommodating guests in our house in the village.We continued that tradition until 2005 when we decided to build the house close to the sea, today’s apartments SilvAna. Despite the development of tourism, we have remained faithful to the tradition of our ancestors - viticulture, olive growing and fishing.Today we are proud owners of small family farm and vineyards on the south slopes of the island were we grow authentic Croatian grape variety Plavac.Our vineyards are situated above the village, in an ecologically clean zone, surrounded by centuries-old stone walls, they stretch all the way to the foothills.Our village is known for the production of the best Croatian red wines, which can owe their quality to an almost perfect geographical position, the benefits of Hvar's climate and the diligent hands of farmers who manually cultivate vineyards on steep and difficult to access slopes. Although one of the most famous Croatian autochthonous varieties dominates - Plavac mali, we also grow several white autochthonous varieties - Prč, Bogdanuša, Pošip. In 2014 we expanded our tourist offer. We began to engage not only in wine growing but also in wine production and we see great results from it. If you are a wine lover, we will be glad to have you visit us in our family house and enjoy the conversation about award-winning wines - Plavac Mali and Bijeli Cuvee. 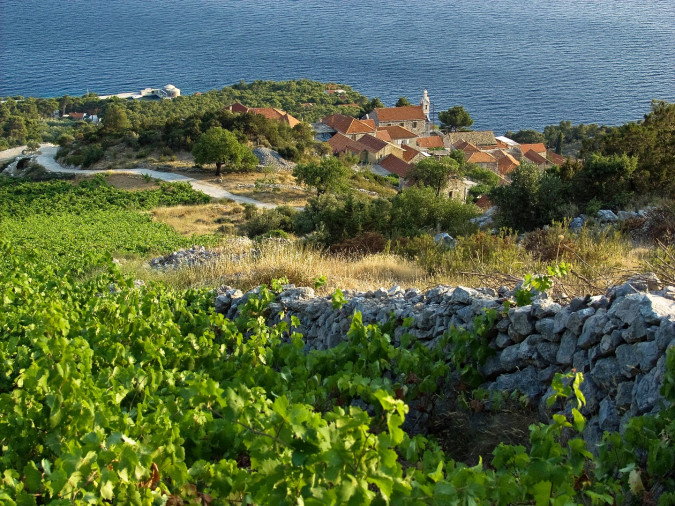 Sveta Nedjelja is located on the southern slopes of the island of Hvar, 12 km from the town of Hvar - a town rich in history and tourist center of the island.

The village originated a long time ago, when residents from the north side of the island came to work in their fields on the southern slopes of the island. Today Sveta Nedjelja has population of around 130 people.

The village consists of two parts: the old part is a typical Dalmatian village with narrow streets and stone houses. In the center of the old village is the local church of St. Spiridiona, elementary school, lavender and rosemary oil distillery. The new part, formed along the coast with a small marina, beaches, restaurants and holiday homes, is mainly used for tourism. Above the old village there is a stretch of vineyards all the way to the foothills. Above Sveta Nedjelja there is also a cave with an impressive interior that served as a shelter for people in the Neolithic. In the 16th century, the Augustinian monks built a church and a monastery in the cave and remained there until 1787. The remains of the monastery where Our Lady of the Snow is located and a small church with Sveta Nedijica, after which the village was named, can still be seen today.

Above Sveta Nedjelja rises the highest peak of the island of Hvar - Sv. Nikola (626 m). At the very top is a white stone cross (built in 1998 on the 850th anniversary of the Diocese of Brač - Hvar - Vis) and the chapel of St. Nicholas, protector of sailors, travelers and children. 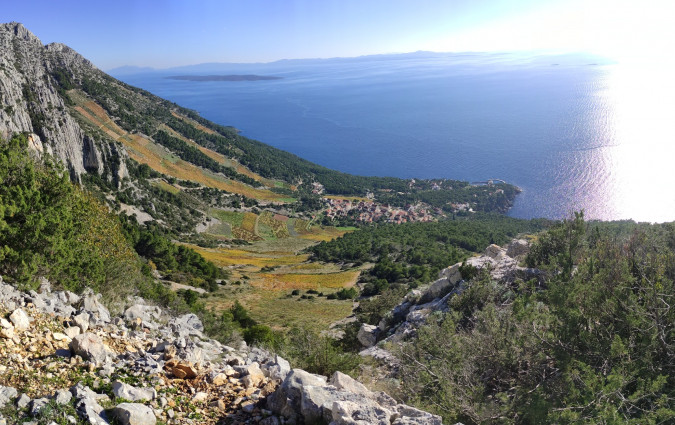